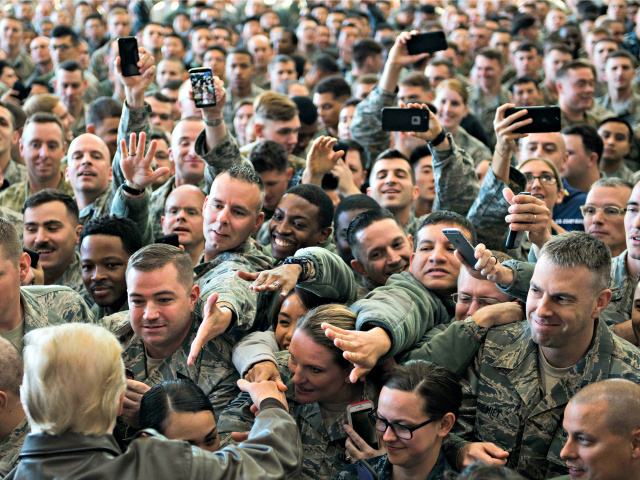 Ambassador McCourt was there the day President Trump’s team called off the trip to the cemetery at Belleau Wood because of inclement weather. She is the latest U.S. official who was actually present at the event to publicly deny the Atlantic’s account of events, which is based entirely on anonymous sources.

“Needless to say, I never spoke to the Atlantic, and I can’t imagine who would,” McCourt told Breitbart News. “In my presence, POTUS has NEVER denigrated any member of the U.S. military or anyone in service to our country. And he certainly did not that day, either. Let me add, he was devastated to not be able to go to the cemetery at Belleau Wood. In fact, the next day, he attended and spoke at the ceremony in Suresnes in the pouring rain.”

McCourt’s denial regarding the Atlantic comes after former White House deputy chief of staff Zach Fuentes, a top confidante of former chief of staff John Kelly, denied the story earlier on Monday in an exclusive statement to Breitbart News.

In addition to Fuentes, former National Security adviser John Bolton has denied the account—as has every other person who could have witnessed the president saying this: officials who were there, from former White House press secretary Sarah Huckabee Sanders to senior adviser Stephen Miller to advisers such as Jordan Karem and Derek Lyons. Secretary of State Mike Pompeo, who was traveling with the president there, has also denied the report. In addition, first lady Melania Trump has denied the report and called the Atlantic article fake news.

While Kelly himself has not said anything publicly at this stage, Fuentes’s denial essentially serves as a denial from Kelly. That’s because Fuentes, in his denial, made clear that Kelly would not have stood idly by if Trump had, in fact, made the remarks that were alleged in the Atlantic story.

“Honestly, do you think General Kelly would have stood by and let ANYONE call fallen Marines losers?” Fuentes asked Breitbart News.

Now, with McCourt’s denial, along with those of everyone else who was in the president’s presence in France during this supposed episode, White House officials familiar with the matter told Breitbart News that there is nobody left who could have witnessed the president say something like this privately about fallen troops:

How can @JeffreyGoldberg have “4 people with firsthand knowledge” of this when everyone who was in the room & would qualify as firsthand sources are now on the record denying his story?

In other words, White House officials current and former told Breitbart News this denial from Ambassador McCourt essentially eliminates any possibility of an actual firsthand account of the president making such remarks, as everyone who was with him on this trip has denied the report except for Kelly–and Fuentes’s statement makes clear Kelly would not have stood by if the president said this.

At a news conference on Monday at the White House, the president again bashed the Atlantic report:

“I do appreciate Zach coming out. He’s now the 15th person to deny it.” pic.twitter.com/u1Kd35MD1h

“The story is a hoax, written by a guy who has a tremendously bad history,” Trump said, adding, “The magazine itself, which I don’t read but I hear is totally anti-Trump—he’s a big Obama person, he’s a big Clinton person—he made up the story. It’s a totally made-up story. In fact, I was very happy to see Zach Fuentes came out and said—I think that’s now number 15. These are people that were there. That’s the 15th person—Gen. Kellogg, everybody that was there, knew what happened. So I was happy to see Zach came out and said it’s not true. He just came out. It’s a disgrace. Who would say a thing like that? Only an animal would say a thing like that. There is nobody that has more respect for not only our military, but for people that gave their lives in the military. I think John Kelly knows that. I think he would know that, and he knows that from me. But Zach Fuentes, as you know, worked for John. I think they both know that, but Zach, as you know, came out today or yesterday, last night, and said very strongly that he didn’t hear anything like that. Even John Bolton came out and said that was untrue. Now what was true is we had the worst weather. We had as bad of rain as I’ve just about ever seen, and it was a fog you literally couldn’t see. I walked out—I didn’t need somebody to tell me—I walked out and said, ‘There’s no way we can take helicopters in this.’ I understand helicopters very well. They said, ‘No, sir. That’s been canceled.’ They would have had to go—Secret Service, I have the whole list. They would have had to go through a very, very busy section during the day of Paris. They would have had to go through the city.”