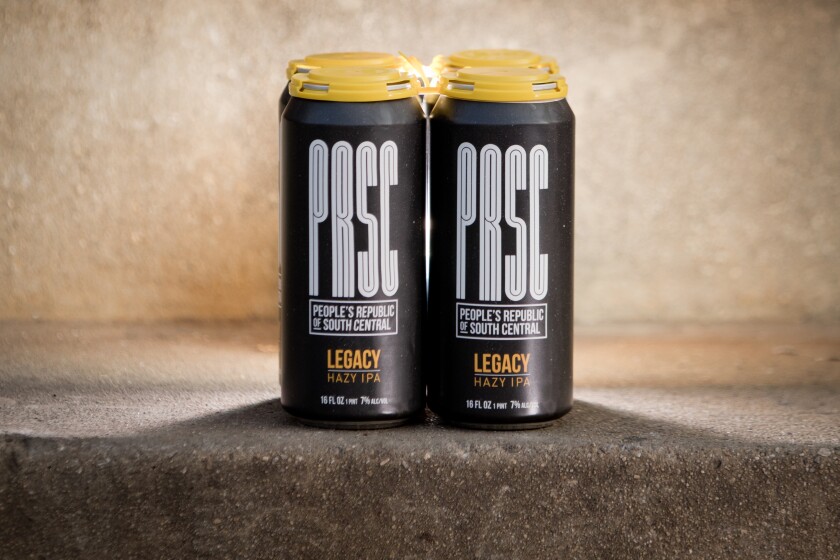 Craig Bowers and Samuel Chawinga are on a mission to create a craft beer community in South Los Angeles. Bowers, a marketing executive and events producer, and Chawinga, a longtime brewer, are behind the new South Los Angeles Beverage Company, an incubator, production and packaging facility scheduled to open in Florence, Calif., next year.

“If you look at craft beer as a category, there’s a lot of conversation right now about the lack of diversity both on the ownership side [and] the employee side, and the customer side is challenging as well,” Bowers said. “We felt that there was a lot of need in that particular area, a need for jobs and a need for a great experience that you didn’t have to travel outside the neighborhood to find.”

The 13,000-square-foot facility will include a brewery, tasting room, outdoor area with multiple food vendors, coffee roastery and cidery. It will be part of the SoLA Beehive, a 92,000-square-foot retail and production space located in a federal Opportunity Zone, one of several thousand Opportunity Zones nationwide, created as part of the 2017 Tax Cuts and Jobs Act meant to promote investment in low-income areas.

“South Central in particular, it’s always been the working-class heartbeat of Los Angeles,” said Bowers, whose parents were born and raised in the area.

The plan is to work with local nonprofits and government agencies to employ at least 75% of the South Los Angeles Beverage Company staff locally. It also is looking to local businesses to fill the various food-vendor opportunities at the facility. But Bowers and Chawinga said they are still prepared for those who will inevitably cry gentrification at a shiny new development in the area.

“In this summer of 2020, we had a lot of conversations about wealth[and] racial inequality. Obviously South Central has had a lot of things going on throughout the years, so we are very much interested in igniting that entrepreneurial spirit that already exists here,” Bowers said. “We want the people in these communities to stay in place and to empower them to be part of the overall process.”

Bowers wants to use his marketing and events background and Chawinga his brewing and branding experience to make the company into an incubator that will help others develop their own companies and products in the craft beverage world. They are working with Los Angeles Trade Technical College in downtown L.A. to create a program that offers formal training for brewers. The South Los Angeles Beverage Company will provide on-the-job training for students to coincide with the program.

“Brewing is a labor of love, and once you get hooked, you get hooked,” Chawinga said. He spent many years brewing beer in Portland, Ore., before moving to Los Angeles in 2016 to open Boomtown Brewery in downtown L.A.

While the new facility isn’t scheduled to open until 2021, the brewery portion has launched its first beer label, the People’s Republic of South Central. And it is releasing its first beer, Legacy, on Sept. 26. The hazy IPA is made with Simcoe, Mosaic and Motueka hops and features notes of pineapple, lemon verbena and lychee.

“Central Avenue used to be the Harlem of the West Coast, and when jazz musicians came in the 1920s, they could not stay in the white parts of town, so they stayed on Central Avenue, the epicenter of Black culture in Los Angeles,” Bowers said. “The reason we named it Legacy is our brewery is right off Central Avenue, and we want to continue the legacy of what Central Avenue meant to the community.”

He and Chawinga partnered with Harold & Belle’s, Ryan and Jessica Legaux’s Southern restaurant in nearby Jefferson Park, for the release. You can preorder the beer online for pickup at the restaurant. All net profits will go toward purchasing Chromebooks for local students to participate in remote learning. The brewery plans to continue to donate profits from a limited quarterly release to charitable causes in South Los Angeles.