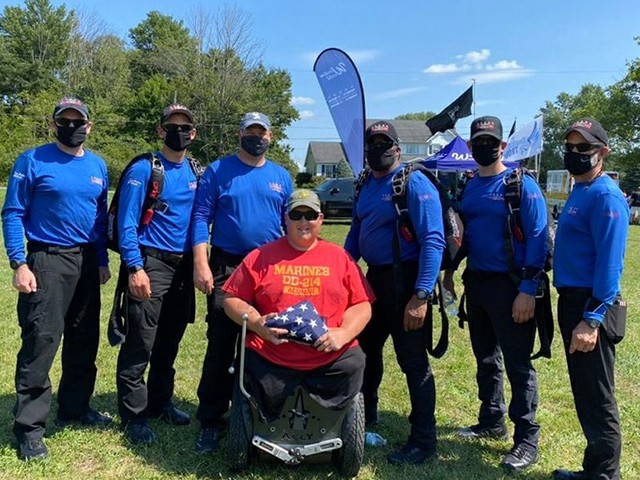 Five members of the All Veteran Parachute Team descended from 5,000 feet and landed at Ralpho Community Township Park to honor David Noblit, a veteran who lost both legs while serving in Afghanistan, according to WNEP.

“The most important thing for me is when I can salute our veterans,” said Michael Elliot, president of the All Veteran Parachute Team.

“When I’m coming down, and I’ve done this over and over again, but I’m nervous because there are performance anxieties. I wanna walk up to our brothers like Dave, and salute him and tell him thanks. Because we as veterans, we understand each other,” he noted.

Noblit had intended to skydive with the team, but the vest ordered for him did not meet legal safety codes.

Still, Noblit said the gesture was “amazing,” adding “when you’re jumping from that high it’s better to be safe than sorry.”

The All Veteran Group, of which the parachute team is a part, agreed to return next year and do a bigger jump with Noblit.

“I’m looking forward to next year, I’m going to hit my goal and it’s going to happen,” he said.

Noblit said what he was most looking forward to regarding the jump next Labor Day weekend was doing it with his fellow veterans.

“If you haven’t been in the boots, it’s just something you won’t understand it, it’s a brotherhood like no other. I definitely miss it, I was blown up in 2010, so since then I’ve definitely been looking for that brotherhood again,” he commented.

Once the skydivers completed their mission, they presented Noblit with a flag.

“I think one word to describe how I felt is pride,” the veteran said, adding, “We do live in the greatest nation in the world.”