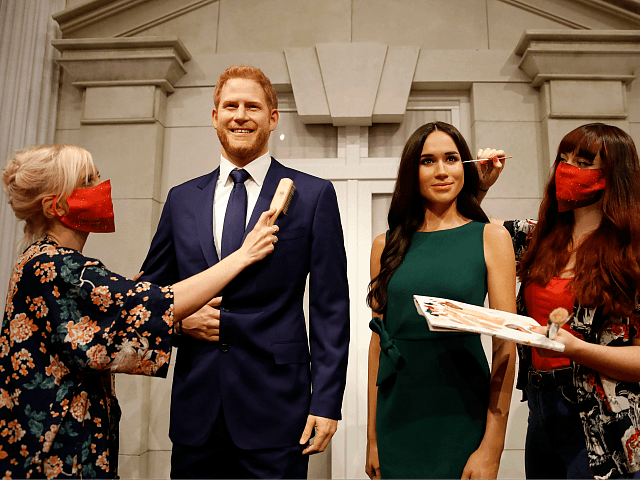 The Duke and Duchess of Sussex — the international embarrassments formerly known as Prince Harry and ‘Princess’ Meghan — have signed a Netflix production deal worth a rumoured $100-150 million.

But not a cent of this money will be spent on anything any of us would dream of watching, as you can tell from the couple’s ominous statement on the kind of programming they intend to create:

“Through our work with diverse communities and their environments, to shining a light on people and causes around the world, our focus will be on creating content that informs but also gives hope.”

I hope they didn’t pay anyone to write that execrable, sub-literate bilge. But I don’t think they did. I reckon that drivel came straight from the marshmallow brain of Meghan herself, especially the last outrageous lie at the end about “informing” and giving “hope”.

It’s a lie — or, let’s be generous, an utterly self-deluded untruth — because, of course, there won’t be any actual information in any of the stuff they put out. It will be pure woke propaganda.

And because it will be pure woke propaganda, any hope it gives will be entirely illusory. There is nothing hope-inducing about woke because it is an ideology — a Weltanschauung, if you prefer — fundamentally opposed to the very things most of us consider to be what make life worth living and our civilisation civilised.

The notion that “all men are created equal”, for example. Woke has no truck with this outmoded concept. Black Lives Matter, for example — which both Harry and Meghan support — is a Marxist, ethnocentrist, separatist movement which plays on the notion of “white privilege” to argue that ethnic minorities should not be treated the same as white people, but better, in order to compensate them for some made-up thing called “structural racism”. How is this possibly a recipe for a just society, for social cohesion or indeed stability and peace of any kind?

I think that lets them off the hook too lightly, though.

For a start, I suspect most of us here take the view that rewards in life should be a function of talent and hard work. But the only reason Harry and Meghan landed this gig is because of the royal cachet Harry conferred on his minor-league actress spouse — which, in turn, must have impressed some starstruck Netflix executive.

I expect, like the Obamas, Harry and Meghan will be able to draw on an extensive contacts book which will enable them to give the impression that they are luring lots of high-end celebrities into the Netflix programming stable. But seriously, wouldn’t those high-end celebrities have come in anyway — and for fees considerably smaller than that rumoured $100-150 million?

Next time you trawl through the Netflix schedule, wondering what the hell you’re going to watch when it’s all so dire, just stop and imagine bitterly for a moment how many more bangs for its buck it would have got if it had given say, a million dollars each to one hundred or one hundred and fifty writers and directors to develop something cool and original.

But the really disgusting thing about the Sussexes’ Netflix deal isn’t that it’s unfair — life IS unfair — and it isn’t that it’s a waste of money (Netflix has money to burn, after all), but that ultimately it will make the world a more toxic, dangerous place.

Sure, Harry and Meghan aren’t actually on the streets of Portland, chucking Molotov cocktails at cops or assassinating people they claim to be Nazis. But they sure as hell share and promote the same cry-bully victimhood politics of those who are. The reason the radical left is out of control and itching for civil war is because for years it has been brainwashed by Hollywood movies, by their teachers, by their college professors, by the latest agitprop bestsellers into believing that America is racist construct, that capitalism is wrong, that Western Civilisation is something of which we should be ashamed — and that cleansing revolution is the only solution.

Harry and Meghan — not that they weren’t already to a degree — have now become fully paid up members of that woke propaganda industry. It’s time they were held to account for it.

Obviously Meghan deserves her share of blame for being the predatory gold digger who infected poor Harry with the zombie bite of woke politics.

But Harry is the more culpable of the duo because, without his princely status, without his connections to the world’s grandest and most glamorous royal family, Meghan would still be languishing in well-deserved obscurity as the fading B-list celebrity who used to be in the later seasons of Suits. It was Harry that weaponised the Meghan monster, thus contributing far more than he should have done to the sum total of human misery.

At Eton, where Harry was educated, the boys are continually reminded how important it is to repay society for the extraordinary privilege they have enjoyed spending five years, surrounded by 15th century and Georgian architecture, at the world’s best school.

Not so long ago, Harry more than did his bit, laying his life on the line with two tours of duty in Afghanistan — first with the Gurkhas, later as a helicopter gunship pilot.

Funny, laddish, irreverent, approachable, he was the kind of royal who, even if you were a republican who wanted the Royal Family abolished, made you think: “Hmm. Well maybe, there is a point to them after all.”

One of the things you always used to be able to imagine about Prince Harry was that, if ever there was a civil war, he’d have been on the right side. He’d be on the side of liberty, common sense, freedom, tradition, national sovereignty — as well as on the side of fun and not taking yourself too seriously. The old Harry would have despised woke and recognised it as the modern, updated successor to the ideologies that gave us Hitler’s Germany, Stalin’s Soviet Union, and Mao’s China (as he would no doubt have realised from lectures at the officers’ training academy, Sandhurst).

If the world goes tits up in the next few months or years, as I seriously worry it might, then the Duke of Sussex will have done his bit to make it happen. History will not look kindly on him.