Novak Djokovic and his petulant tendencies flirted with disaster once too often on Sunday night when he was sensationally defaulted from the US Open.

The world number one was kicked out of Flushing Meadows as, in a flash of temper that has become too common, he angrily swiped a ball away that struck a female line judge in the throat.

After initially pleading that the woman was not seriously hurt, Djokovic eventually walked off and later apologised for ‘causing her such stress’, saying his swipe was ‘so unintended, so wrong’.

Massive favourite for the tournament, the 33 year-old Serb had already been showing signs at frustration at the resistance being put up by Spain’s Pablo Carreno Busta when he was broken for 5-6 in the opening set. 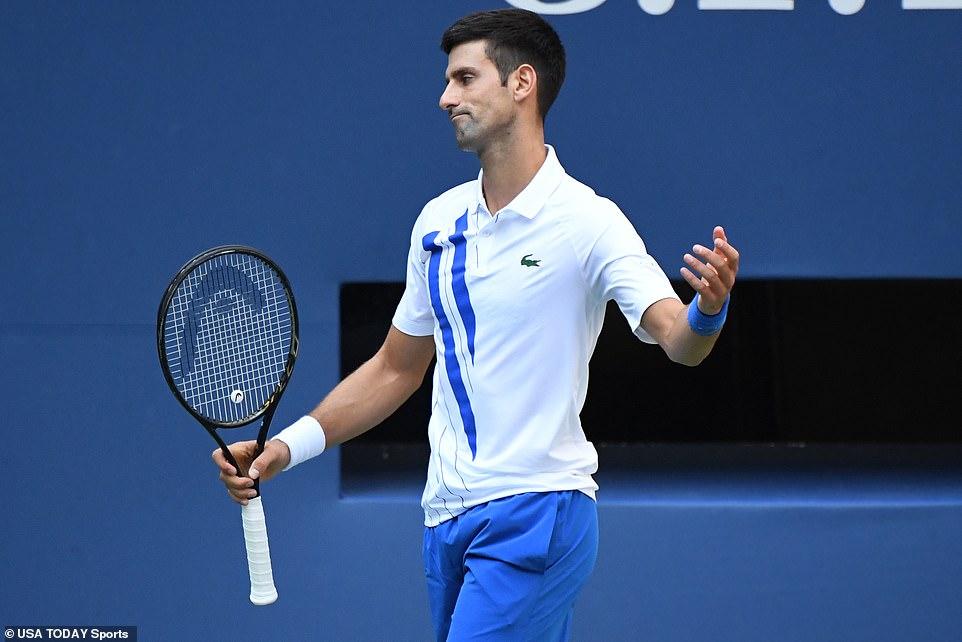 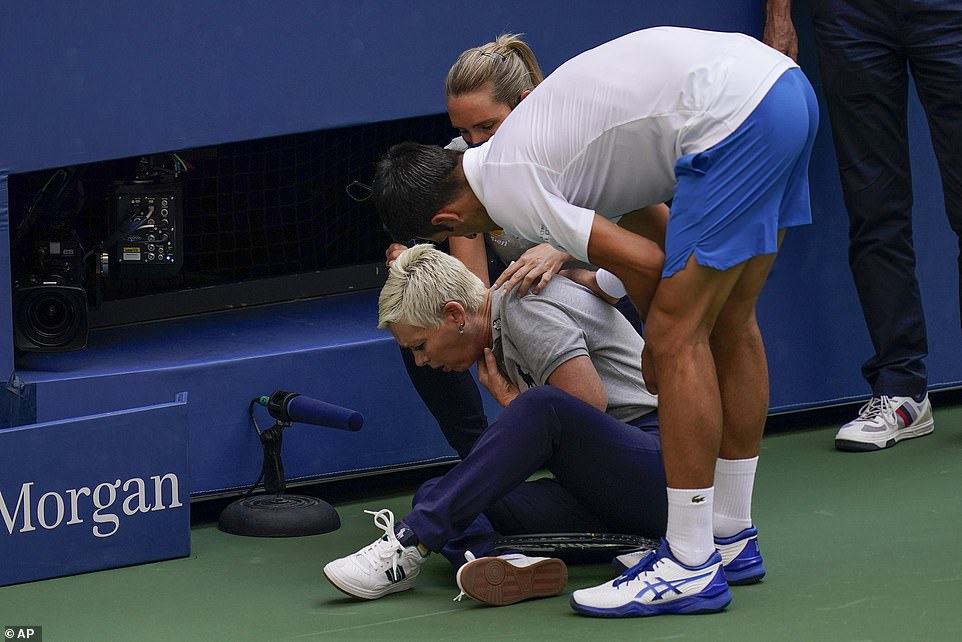 Djokovic, of Serbia, checks on a lineswoman after hitting her with a ball at the US Open

The line judge was named by relatives as Laura Clark, from Owensboro, Kentucky, with friends telling WKBR that she was not seriously hurt.

While Djokovic was clearly not aiming for her, the ball hit Clark, who keeled over. The rules are quite clear: he had to go.

Referee Soeren Friemel was summoned onto court inside the deserted Arthur Ashe Stadium by umpire Aurelie Tourte. Djokovic was told, after plenty of debate, that there was no option.

He could be heard pleading for leniency, all to no avail.

‘She doesn’t have to go to the hospital for this,’ he said as he stood at the net, a shocked look across his face. ‘You’re going to choose a default in this situation? My career, Grand Slam, centre stage?’

This whole situation has left me really sad and empty. I checked on the lines person and the tournament told me that thank God she is feeling ok. I‘m extremely sorry to have caused her such stress. So unintended. So wrong. I’m not disclosing her name to respect her privacy. As for the disqualification, I need to go back within and work on my disappointment and turn this all into a lesson for my growth and evolution as a player and human being. I apologize to the @usopen tournament and everyone associated for my behavior. I’m very grateful to my team and family for being my rock support, and my fans for always being there with me. Thank you and I’m so sorry. Cela ova situacija me čini zaista tužnim i praznim. Proverio sam kako se oseća linijski sudija, i prema informacijama koje sam dobio, oseća se dobro, hvala Bogu. Njeno ime ne mogu da otkrijem zbog očuvanja njene privatnosti. Jako mi je žao što sam joj naneo takav stres. Nije bilo namerno. Bilo je pogrešno. Želim da ovo neprijatno iskustvo, diskvalifikaciju sa turnira, pretvorim u važnu životnu lekciju, kako bih nastavio da rastem i razvijam se kao čovek, ali i teniser. Izvinjavam se organizatorima US Opena. Veoma sam zahvalan svom timu i porodici što mi pružaju snažnu podršku, kao i mojim navijačima jer su uvek uz mene. Hvala vam i žao mi je. Bio je ovo težak dan za sve. 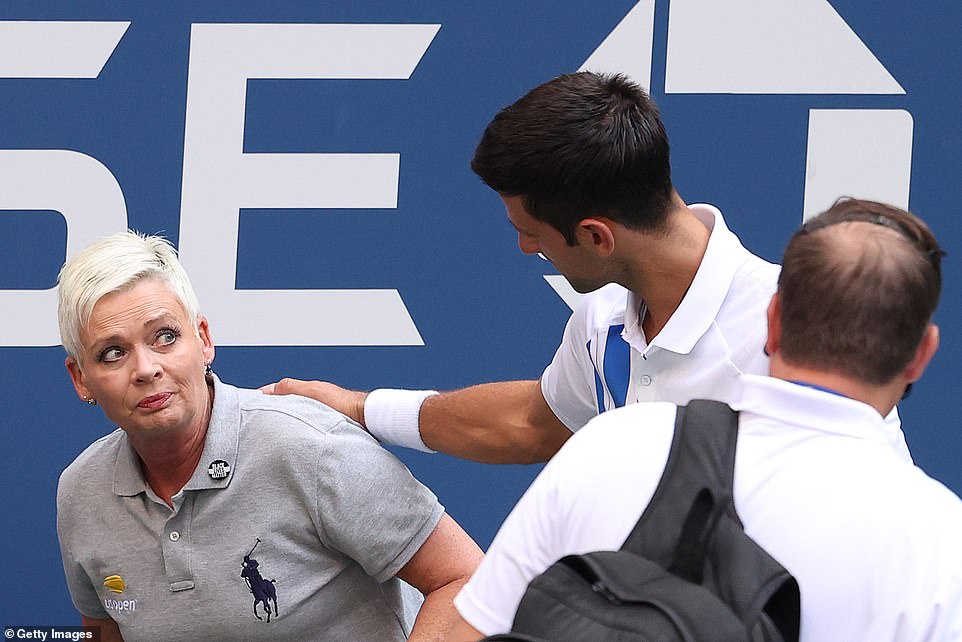 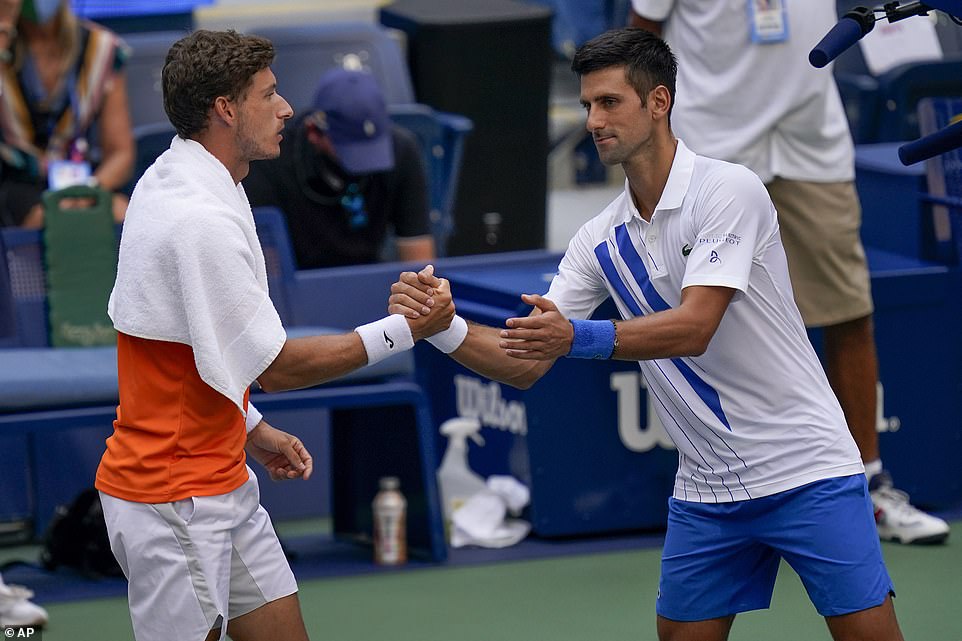 Djokovic shakes hands with Pablo Carreno Busta, of Spain, after defaulting the match

Unbelievable that @DjokerNole has been defaulted. This was the correct decision under the rules regardless of intent or not. Novak should have stayed for the press conference & apologise. We must take responsibility for our actions no matter how difficult the situation is. 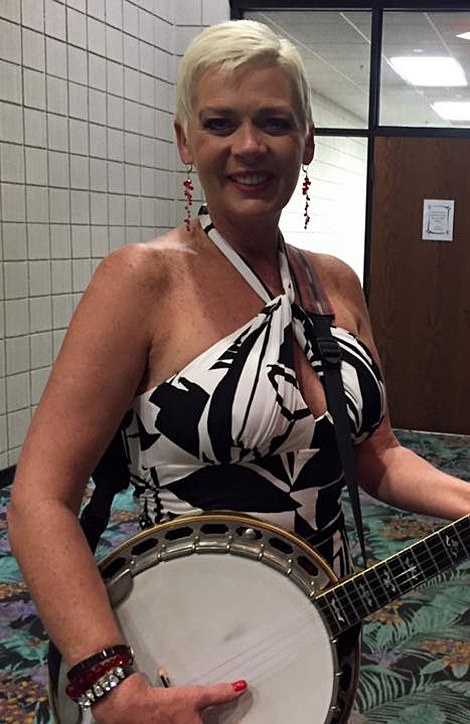 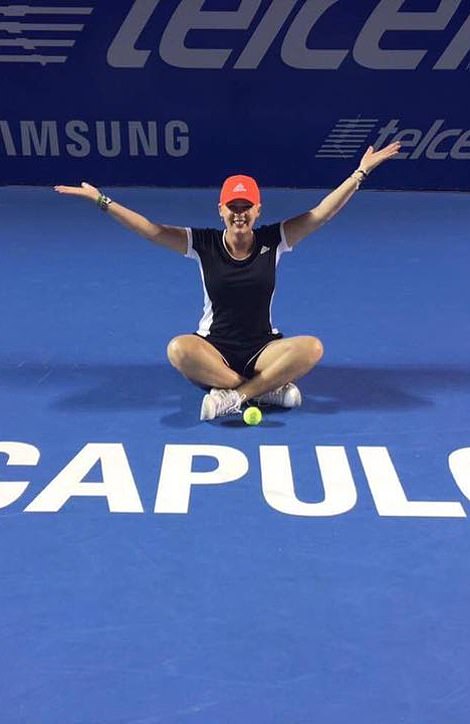 The line judge was named last night as Laura Clark (pictured), a tennis lover from Owensboro, Kentucky who worked her way up from junior and college tournaments to officiate at the sport’s showpiece events such as the US Open and Davis Cup

Kentucky line judge hit in the throat by world no 1

The line judge at the centre of Djokovic’s disqualification was named last night as Laura Clark from Owensboro, Kentucky.

After becoming enthralled by tennis by watching 1990s stars Andre Agassi and Pete Sampras, Clark worked her way up from junior and college tournaments to officiate at tennis’s showpiece events such as the US Open and the Davis Cup.

Speaking to local magazine Owensboro Living in 2014, Clark said she had previously had a lip busted by a 130mph serve at a tournament in Louisville.

‘The only times we are seen by the people are during our mess-ups. Period,’ she said.

‘The first time you are on a big court it is terrifying, and it is the coolest, most terrifying experience in the whole world. You are shaking so hard and you’re sure they can see you shaking.’

However, she said she sympathised with top players and the pressure they were under – saying there are ‘no calls that are not significant’.

Friends said last night that she was not seriously hurt by the ball to the throat, and Djokovic offered her an apology for having ’caused her so much stress’.

Friemel, backed up by senior official Andreas Egli, held firm, even when he added: ‘You have a game penalty, set penalty, many options.’

Djokovic quickly left the stadium afterwards without attending the mandatory press conference to explain himself.

That refusal from the newly self-appointed head of a players’ union quickly drew criticism from ex British number one Greg Rusedski, among others: ‘It’s a very difficult situation but he should have come into press, taken responsibility and apologised for the situation,’ Rusedski told Amazon Prime.

Australian tennis star Nick Kyrgios asked a question on Twitter: ‘Swap me for jokers (Djokovic) incident. ‘Accidentally hitting the ball kid in the throat’ how many years would I be banned for?’

Hours later Djokovic released a statement that read: ‘This whole situation has left me really sad and empty. I checked on the lines person and the tournament told me that thank God she is feeling ok.

‘I’m extremely sorry to have caused her such stress. So unintended. So wrong. I’m not disclosing her name to respect her privacy. As for the disqualification, I need to go back within and work on my disappointment and turn this all into a lesson for my growth and evolution as a player and human being.

‘I apologise to the US Open tournament and everyone associated for my behaviour. I’m very grateful to my team and family for being my rock support, and my fans for always being there with me. Thank you and I’m so sorry.’

This was arguably the most dramatic disqualification since British umpire Gerry Armstrong, now the Wimbledon Referee, booted John McEnroe from the Australian Open 1990 for verbal abuse.

Djokovic had looked extremely likely to add to his seventeen Major titles and had been in imperious form, boasting a 26-0 record for 2020 which may have extended to the end of this strange season. 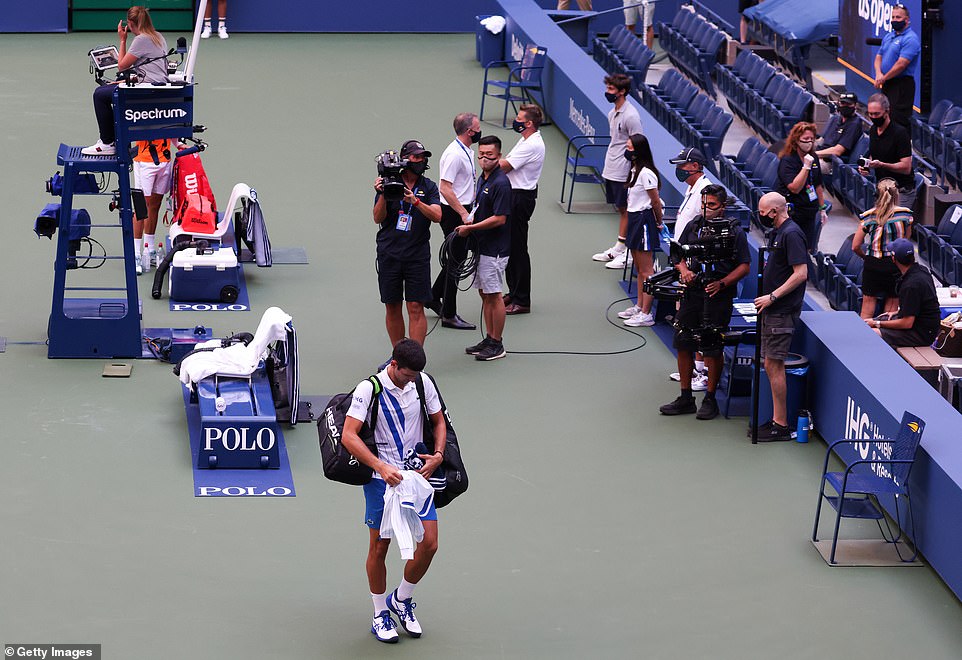 Swap me for jokers incident. ‘Accidentally hitting the ball kid in the throat’ how many years would I be banned for?

The disqualification is a massive blow to his hopes of usurping Rafael Nadal and Roger Federer, both absent from Flushing Meadows, who stand on nineteen and twenty Grand Slam titles respectively. At the age of 33 he can hardly afford to spurn such opportunities, and being fined his £123,000 prize money is the least of it.

One upshot of the drama is that there will be a long-awaited new Grand Slam champion in men’s tennis for the first time since Marin Cilic won in New York six years ago.

There appears little question that Djokovic’s angry swish of the racket did not mean to injure anyone. Immediately that he saw he had hit his unintended target he gestured his apology, knowing that he was in deep trouble.

Tim Henman was defaulted from Wimbledon 25 years ago for a similar mishap. ‘It’s the right decision. It happened to me at Wimbledon 1995 in the same scenario, You have to be responsible for your actions, when you look at the facts you have to be defaulted.’ 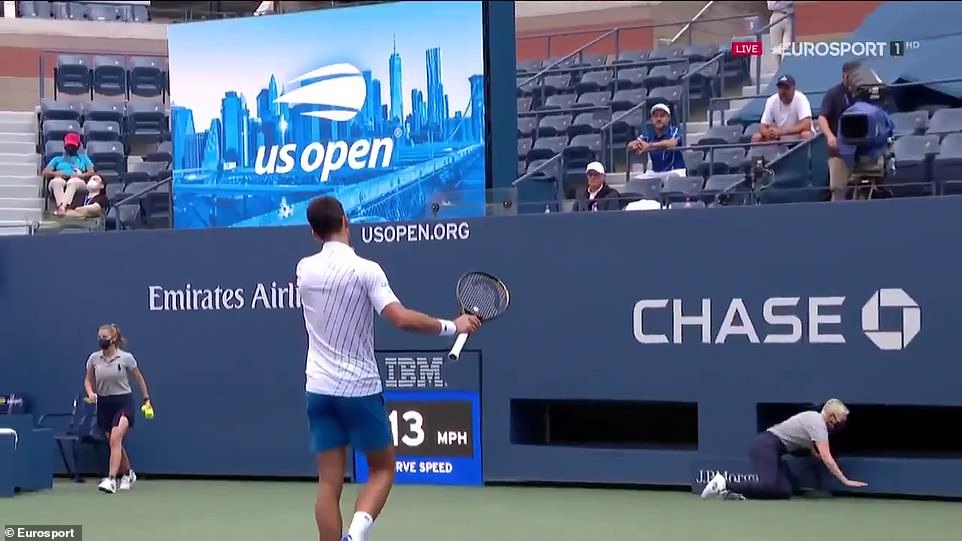 This time it was borne of someone who sometimes acts as if he is above the sport, as he tries to cement a legacy comparable to that of Nadal and Federer.

Djokovic has sailed close to the wind many times before, with instances of him thrashing balls away in anger that have gone into the crowd, or snatching towels from ballkids in an aggressive manner.

There was a notable incident in 2016 at the French Open when he played Czech Tomas Berdych. He hurled his racket into the clay in the direction of a line judge, and when it bounced up it was only thanks to the official’s reflexes that is missed his head. He could have been gone there as well, and not gone on to win his solitary title at Roland Garros.

In a way this is an appropriate end to a lockdown summer that has badly tarnished the reputation of a highly intelligent, driven and complex man who is, without doubt, among the greatest players ever. 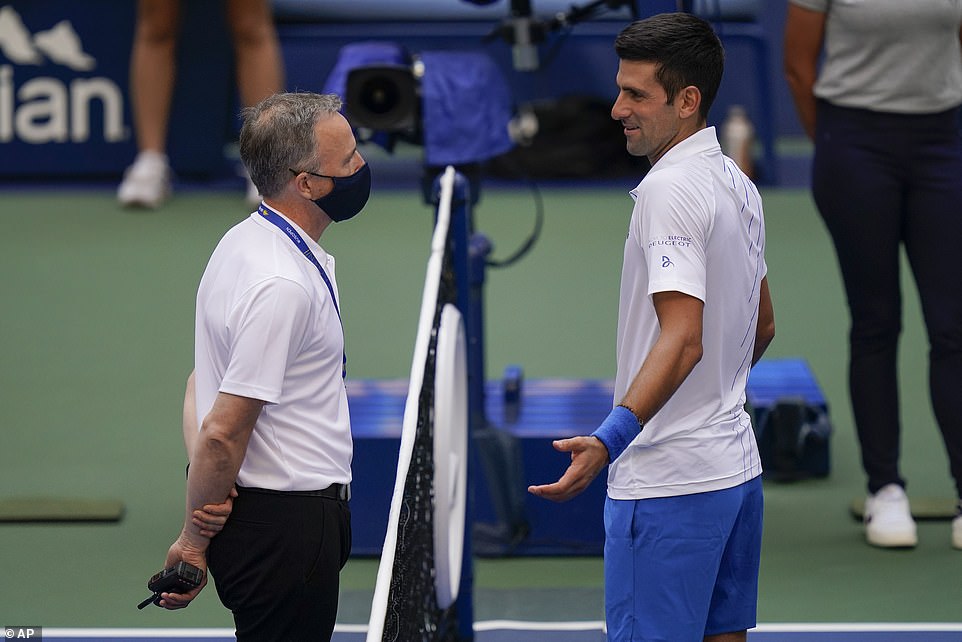 He organised the disastrous Adria Tour around the Balkans, which needed to abandoned when numerous participants, including himself and his wife, tested positive for Coronavirus.

The whole guiding principle behind the exhibition series seemed to be that Covid 19 was something that could be overlooked, and there was a marked lack of social distancing running through the whole production. It overshadowed his substantial charitable donations to Covid charities.

Before that he was criticised by one of Serbia’s top government epidemiologists for his anti-vaccine views.

He must now decide on his next move ahead of the French Open, which is due to happen later this month. Number two seed Dominic Thiem becomes the new favourite for the US Open, and a fresh champion is guaranteed. 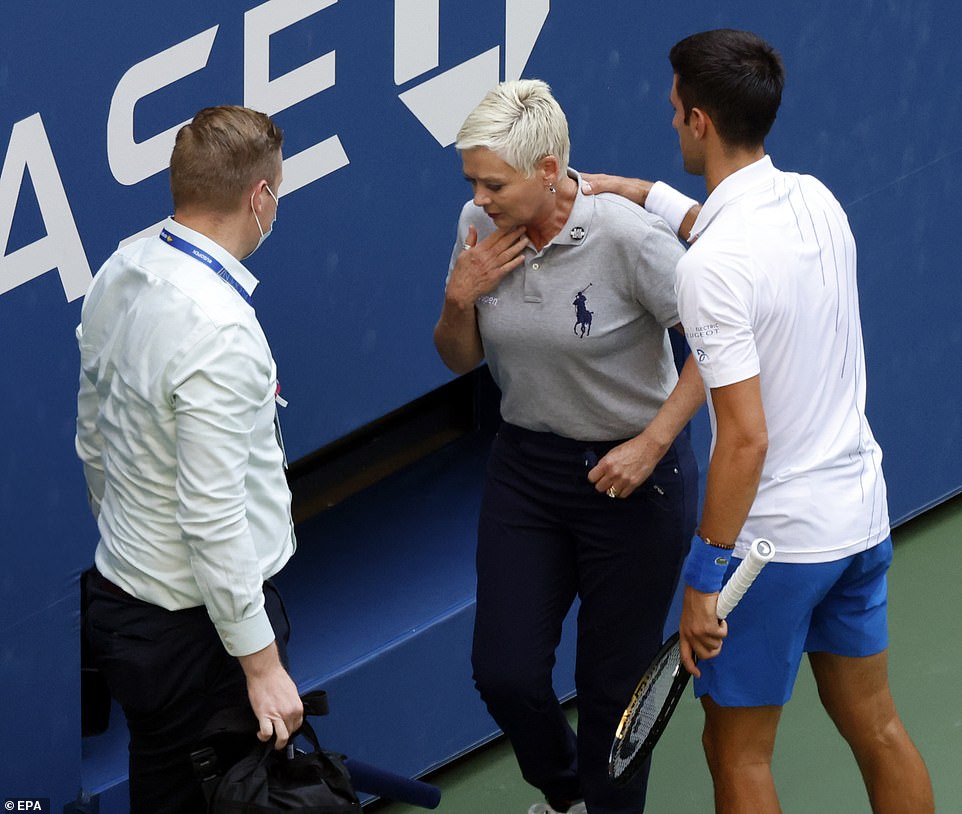