Lewis Hamilton has slammed Bernie Ecclestone as ‘ignorant and uneducated’ after the ex-F1 boss said ‘black people are more racist than white people’.

The 35-year-old hit out at the 89-year-old in a series of Instagram posts following the controversial comments in a CNN interview.

Hamilton wrote: ‘Damn, I just don’t even know where to start with this one. So sad and disappointing to read these comments.’ 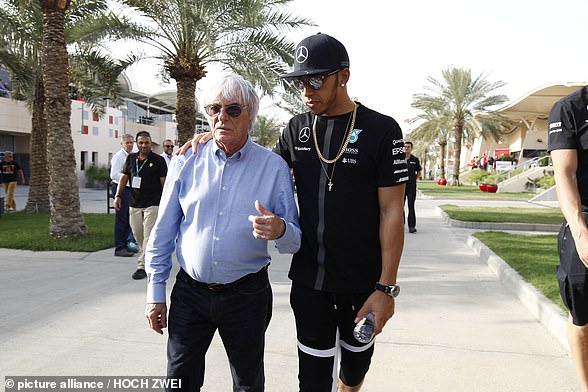 Bernie Ecclestone, pictured with Lewis Hamilton in 2015, told CNN it was ‘stupid’ to pull down statues amid pressur from Black Lives Matter campaigners 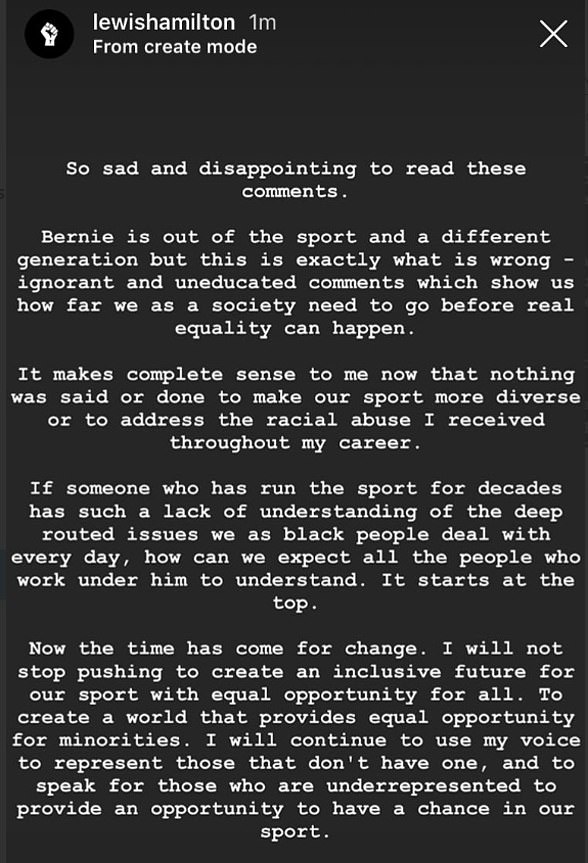 The 35 -year-old posted on Instagram: ‘So sad and disappointing to read these comments’

He continued: ‘Bernie is out of the sport and a different generation but this is exactly what is wrong – ignorant and uneducated comments which show us how far we as a society need to go before real equality can happen.

‘It makes complete sense to me now that nothing was said or done to make our sport more diverse or to address the racial abuse I received throughout my career.

‘If someone who has run the sport for decades has such a lack of understanding of the deep routed issues we as black people deal with every day, how can we expect all the people who work under him to understand. It starts at the top.

‘Now the time has come for change. I will not stop pushing to create an inclusive future for our sport with equal opportunity for all.

‘To create a world that provides equal opportunity for minorities. I will continue to use my voice to represent those who don’t have one, and to speak for those who are underrepresented to provide an opportunity to have a chance in our sport.’ 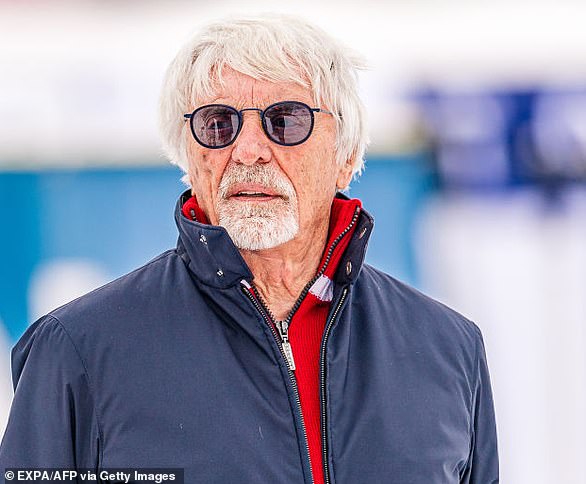 Mr Ecclestone, the ex-F1 Group chief executive, made the comments during an interview with CNN, reacting to recent Black Lives Matter protests in the wake of the death of George Floyd in the US.

He said: ‘In lots of cases black people are more racist than what white people are.

‘[It’s just] things over the years that I’ve noticed, and there’s no need for it. I’m against injustice for anyone, whatever colour they are. It’s important to do something about that for a start.’

Hamilton recently revealed the racial abuse he had received in his career, including an incident in Spain in 2008 where fans taunted him in blackface.

Shocking pictures from the race 12 years ago showed fans in blackface, wearing t-shirts with ‘Hamilton’s family’ written across the front.

More fans were spotted in blackface at the same race the following year. 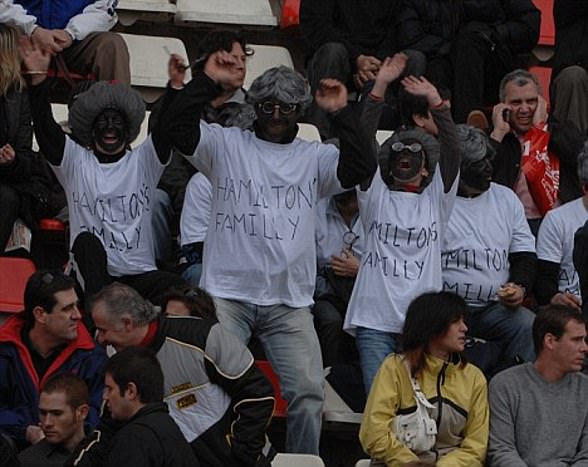 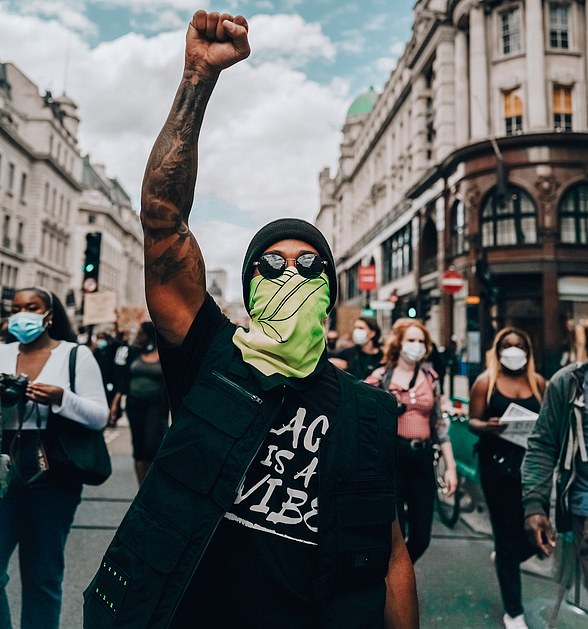 During recent Black Lives Matter protests, Lewis Hamilton has shared his experience with racial abuse – including when fans dressed in blackface at the Spanish Grand Prix in 2008

Mr Ecclestone said: ‘I’m surprised that it concerns him [Hamilton]. I’m really unhappy if he took it seriously. I never thought he did. I didn’t think it affected him.’

‘As a nation, we’re quick to condemn monkey noises and bananas thrown at black footballers, but when it comes to addressing structural issues, the people in power stay silent.

He added: ‘Being the first black ‘anything’ is a proud and lonely walk. When I started out, I took my father’s advice to work twice as hard, keep my head down, my mouth shut, and let my driving do the talking.

‘It was only when wearing my helmet that I felt free to be myself.’

F1 Supremo Mr Ecclestone, also told the interview it was ‘stupid’ to remove statues amid pressure from the Black Lives Matter movement. 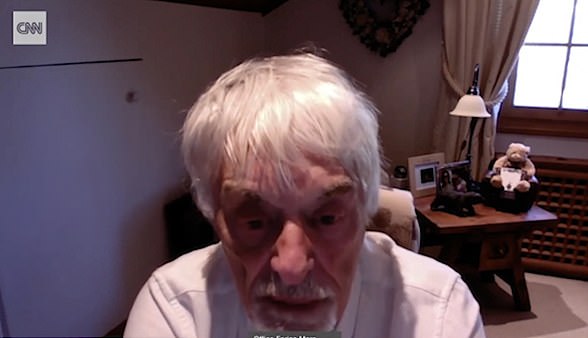 He claimed students should instead be shown statues of controversial figures should to understand their history.

Mr Ecclestone was seen as the man in charge of Formula One for nearly 40 years, until Liberty Media completed its £6.4billion takeover of the sport in 2017.

In April the 89-year-old announced his partner Fabiana Flosi, 44, was pregnant with his fourth child.

Hamilton took to Instagram last Wednesday to respond to allegedly fabricated quotes, which were reportedly from an F1 chief, that claimed drivers involved in the anti-racism movement could be distracted.

In the since deleted post, he said: ‘It deeply saddens me that you consider fighting for equal treatment of black people and people of colour, a distraction. 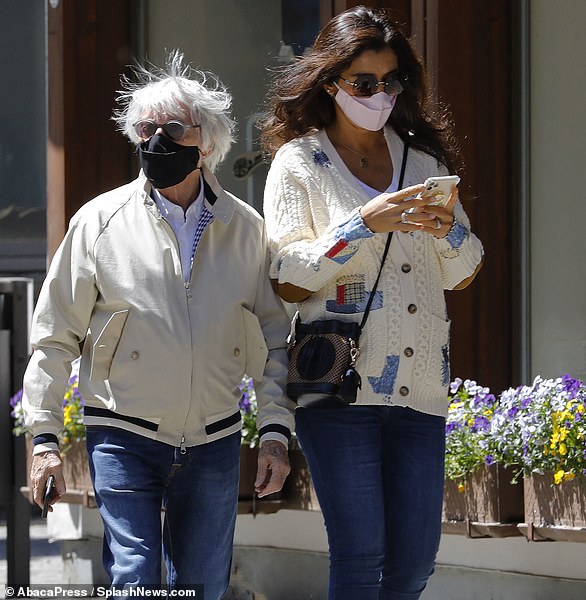 Bernie Ecclestone, 89, with his wife Fabiana Flosi, 44, during a visit to the construction of their Swiss hotel. The F1 Supremo claimed ‘black people are more racist than white people,’ in an interview with CNN

‘I’m actually quite offended. A distraction for me was fans showing up in black face to taunt my family on race weekends.

‘A distraction for me was the unnecessary and additional adversity and unfair treatment I faced as a child, teen, and even now, due to the colour of my skin.

‘I hope this speaks volumes to the few people of colour you do have on your team about your priorities and how you view them. Wake up. This sport needs to change.’

Racing in the US has been rocked by scandal in recent weeks after NASCAR’s only full-time black driver found a noose in his garage stall at Talladega Superspeedway.

A crew member for Richard Petty Motorsports discovered the noose on Sunday at the Alabama race track.

The FBI launched a full investigation amid fears it had been placed as a hate crime.

But earlier this week investigators revealed it was a garage door pull rope styled like a noose that had been hanging since at least October 2019.

No federal charges would be filed.