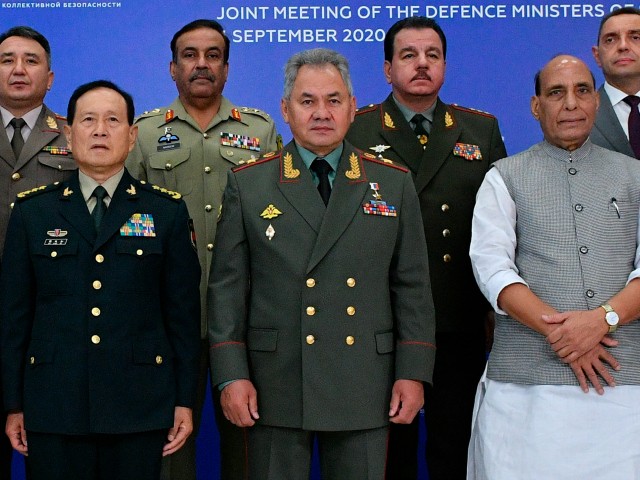 The defense ministers of India and China met for diplomatic talks on Friday in Moscow amid a recently escalated border dispute between the two countries in the Western Himalayas.

“[Indian] Defense Secretary Ajay Kumar and Indian Ambassador to Russia D B Venkatesh Varma were part of the Indian delegation at the talks that began at around 9:30 pm Indian time at a prominent hotel in Moscow. The meeting lasted for two-and-a-half hours,” India’s NDTV reported.

“[A] peaceful, stable, and secure region of SCO-member states, which is home to over 40 percent of the global population, demands a climate of trust and cooperation, non-aggression, respect for international rules and norms, sensitivity to each other’s interest and peaceful resolution of differences,” Singh told journalists at an SCO ministerial meeting earlier Friday while in Wei’s presence.

India and China have been engaged in an ongoing standoff along their western Himalayan border since a clash between their militaries on June 15 in the Galwan Valley of India’s northern Ladakh territory. The clash killed 20 Indian soldiers and an estimated 40 Chinese troops and was the deadliest border conflict between the two countries in at least 45 years. China denies any casualties.

The standoff escalated on Tuesday when Tibetan officials said an ethnic Tibetan commander in the Indian Army was killed on August 29 in a border confrontation in Ladakh. Reports indicated another ethnic Tibetan Indian soldier was injured in the conflict near Pangong Tso, a lake located directly on India’s border with China, known as the Line of Actual Control (LAC).

India sent its army chief to the region on Thursday to assess the local border regiments’ operational readiness.

“The current situation along the LAC is a bit delicate and serious … For our security, we [have] undertaken some precautionary steps and we are assured that [the] situation will remain unchanged. We have taken steps… [that] will help us,” Army chief General MM Narvane told Asia News International (ANI) on Friday from Ladakh.

The Indian Army occupied multiple strategic locations and mountain passes in Ladakh over the weekend, including the southern bank of Pangong Tso, site of the reportedly deadly border clash on Saturday. In response, “China has moved additional forces opposite the Chushul sector in eastern Ladakh,” located just south of Pangong Tso, the Times of India reported on Friday.

India has reinforced both its western and eastern Himalayan borders with additional troops and military equipment over the past few days. On Wednesday, Pakistani media reported that India moved troops to Anjaw, in its northeasternmost state of Arunachal Pradesh, which is bordered by Chinese-occupied Tibet to the north. India also sent its air force chief to the country’s eastern Himalayan border on Wednesday to assess the local combat units’ operational readiness, mirroring its action on the western front.