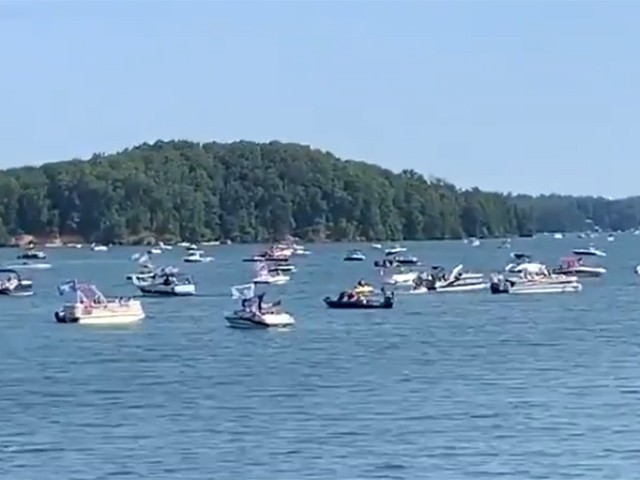 Reporter Maura Sirianni tweeted footage of the event, noting that the turnout exceeded expectations. “Organizers of the parade previously said they only expected about 700 boats,” she tweeted.

Just after ten a.m., Sirianni tweeted video footage of the parade and said the lake was filled with Trump supporters:

Organizers of the parade previously said they only expected about 700 boats.

“What a great way to show support for Our first responders and the leadership of this great nation. Let’s come together as Brothers and Sisters and celebrate these very freedoms,” the page read.

Another parade for the president, law enforcement officers, and veterans in North Wildwood, New Jersey, attempted to break a world record on Saturday, according to Breitbart News.

Video footage of the event showed participants with American flags and Trump 2020 flags as Lee Greenwood’s song, “God Bless the U.S.A.” played in the background:

Saturday evening, Trump tweeted video of a boat parade and said, “Wish I could join you, but totally focused on November 3rd. Thank you! #MAGA”:

Wish I could join you, but totally focused on November 3rd. Thank you! #MAGA pic.twitter.com/bZ31JCgz99

“Nothing better on a perfect Saturday than a few thousand boats honoring our veterans and our law enforcement with a flyover from the U.S. Coast Guard!” Republican U.S. House candidate David Richter (NJ-3) said of the New Jersey event:

Nothing better on a perfect Saturday than a few thousand boats honoring our veterans and our law enforcement with a flyover from the U.S. Coast Guard! #NJ03 #TrumpBoatParade pic.twitter.com/F254K6WCir

Also on Saturday, boaters in Oklahoma took part in a pro-Trump parade at Lake Eufaula, according to 5 News Online.

“In all my years living near Lake Eufaula I’ve never seen this many boats on the lake at one time. It was insane. Water got really rough a few times but other than that it was perfect,” wrote one participant on the event’s Facebook page.

“One thing that stood out more than anything yesterday was the friendliness from EVERYONE on the water. Lots of laughs, hooping and hollering and not a negative thing said the whole day. Great job Eufaula, Oklahoma. Makes me proud,” he concluded.