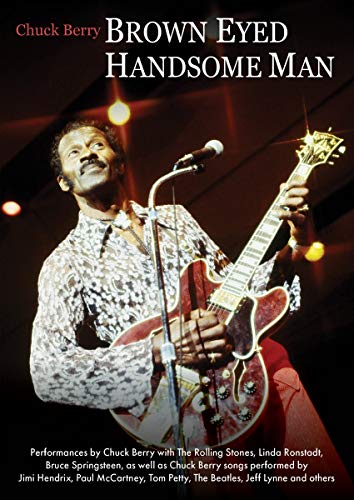 ”Chuck Berry-Brown Eyed Handsome Man” is a collection of performances by the greatest rock icons in history performing their favorite songs by their self-proclaimed hero Chuck Berry. For the first and possibly only time ever you will see full performances from the legends of rock and roll honoring the man they agree started it all. The program is a historic record of the decades long and continuing impact for the father of Rock ‘N Roll. We are proud to present in just one program these superstars of Rock; The Beatles, the Rolling Stones, Bruce Springsteen, Tom Petty, Jimi Hendrix, Jeff Lynne and more, all filmed at the heights of their own careers performing the work of Chuck Berry.

Carol
Maybelline
Wee Wee Hours
You Can’t Catch Me
Around and Around
Roll Over Beethoven
Johnny B. Goode
Back In the U.S.A.
Nadine
Sweet Little Sixteen
Carol
Brown Eyed Handsome Man
Let It Rock
Memphis