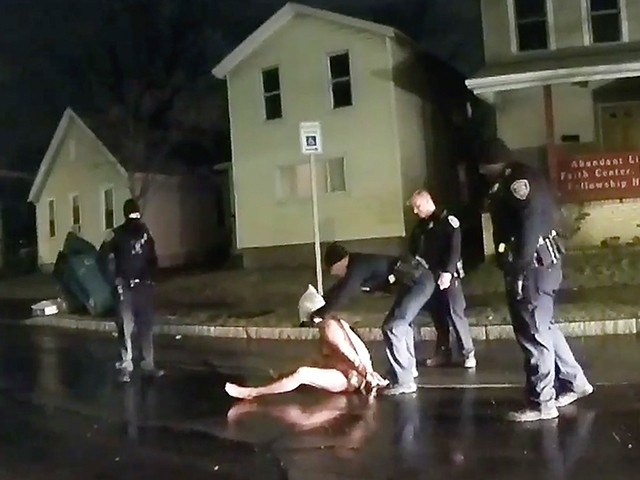 Black Lives Matter activists confronted and harassed diners in Rochester, New York, on Friday night after police released a video of a man who died in custody.

#HappeningNow the protesters in Rochester NY are “shutting down restaurants”, tables are broken, people running off scared #rochesterprotests pic.twitter.com/oxmlZp526w

The objective, apparently, was “shutting down restaurants.” Patrons fled as the demonstrators climbed over railings and entered the eatery to disrupt a quiet Friday evening.

Videos posted by local reporter Geoffery Rogers showed tables and glasses being thrown by the rioters:

It got a little violent with chairs and glass being thrown. The crowd has since calm down. #ROC pic.twitter.com/a94FFrV7Ts

Here’s a video of one restaurant having chairs, tables, glass etc. thrown and destroyed during the protest. #ROC pic.twitter.com/Yq0tVaEKfD

A bus stop was lit on fire during the protest Rochester New York. #ROC pic.twitter.com/RYmPwu1tom

Second fire started in a dumpster some protest are trying to put it out. #ROC pic.twitter.com/vQnj1ClGdW

Similar to a tactic used in Portland and Seattle, rioters threw lit fireworks at police officers:

Fireworks thrown at officers in Rochester New York during the protest. #ROC pic.twitter.com/1z649UsSNg

Maranie R. Staab captured a white woman raging on police, pointing her finger and lecturing them:

#rochester #Police have blocked off bridges leading into downtown. Several hundred protesters are attempting to march towards the #roc public safety building to protest the murder of #danielprude #rochesterprotests pic.twitter.com/S2wvDUr495

“You guys do not serve our city,” she shouted as several officers stood still at an intersection.

“And I don’t believe in hell, but if there is one, you guys are going to it,” she declared. “You will see your maker!”

At least one resident did not seem to appreciate the battle that was playing out in the streets of Rochester:

“Go home!” he shouted in the middle of the street to the black-clad agitators.

“Sign up and become a Rochester city police officer if you have a better idea!”

He asked how they were helping society. No one responded.

After one rioter told him to “shut the f*ck up,” the man did not back down.

The agitators then tussled with themselves after one challenged the man.

The rioting and destruction came after police released a video of Daniel Prude sitting nude in the street with a bag over his head in late March.

Joe Prude had called police after his brother fled his home and told the responding officer “Daniel was on the drug PCP and was hallucinating earlier in the day,” according to CNN.